Thomas the Tank Engine ransomware - a threat or a joke?

If you think you’ve seen everything, think again – Thomas the Tank Engine ransomware is on its way to your computer. It is a recent piece of malware that is a bit different from the rest, both in its appearance and demands. It appears that the beloved tank engine is interested in seeing you naked.

The ransomware, actually called nRansom by its creators, does not encrypt any files like Locky[1], nor does it threaten to send others your private info like LeakerLocker.

Instead, once it gets the hold of your PC, it simply locks the screen and shows a particular message. In other words, it tries to prevent you from using your computer unless you enter a code.[2] The message background is filled with the pictures of Thomas the Tank Engine swearing at you.

But how do you get the decryption code? Well, you can see for yourself – this is the message a victim gets once the nRansom locks the screen:

“Your computer has been locked. You can only unlock it with the special unlock code. go to protonmail.com and create an account. Send an email to 1_kill_yourself_1@protonmail.com. We will not respond [sic] immediatly. After we reply, you must send at least 10 nude pictures of you. After that we will have to verify that the nudes belong to you. Once you are verified, we will give you your unlock code and sell your nudes on the deep web

Got your unlock code and sent your nudes?

As you can see, the hackers demand your nude pictures – more precisely, at least 10 of them. This is very unusual because hackers behind ransomware usually demand a payment in bitcoins or other types of cryptocurrency.[3] Also, it is quite unlikely that someone would be interested in your pictures on the deep web when there is more than enough similar content already. 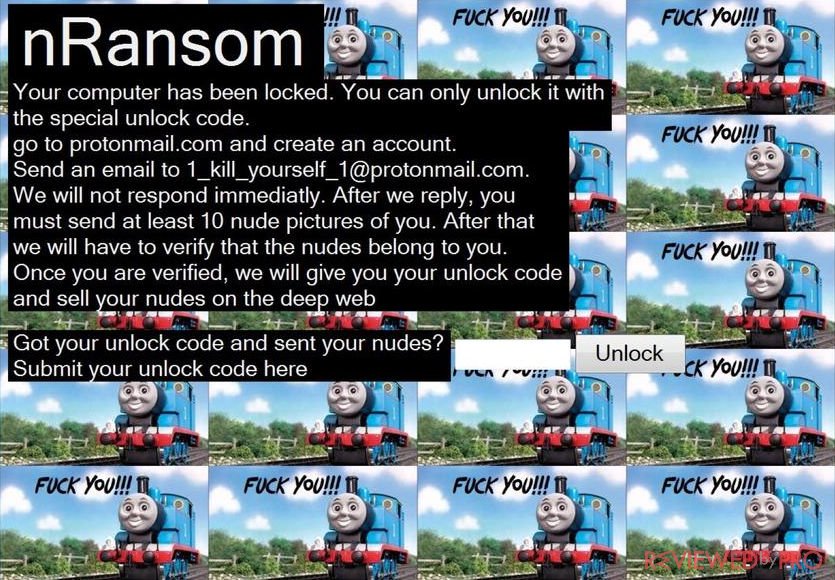 At first, the unlock code was 12345, but it was changed later. It is actually unknown whether this ransomware is real or simply a joke. However, it is detected as Troj/LockScr-U[4] by Sophos, which means that security tools should detect it as malware.

Unfortunately, it is known that the ransomware now has an updated version. The old email address is changed to a new one – 2_kill_yourself_2@india.com.[5] The second version goes a bit extreme with its demands – the hackers order the victim to kill 10 people, film it, and send them the video, as well as provide them with 20 naked photos. A bit too much for a computer to be unlocked, isn’t it?

Currently, we don’t know any cases of the infection – there were no reports from users. Hopefully, this is only a prank which won’t evolve into something really dangerous.

To delete the current versions, it is enough to restart your computer in Safe Mode and remove nRansom with your trusted anti-malware program.

Your opinion regarding Thomas the Tank Engine ransomware – a threat or a joke? Cancel reply