ProtonVPN [1] is a virtual private network (VPN) service developed by CERN and MIT scientists. The VPN Allows users to surf anonymously, unblock websites and encrypt the connection. ProtonVPN was developed in 2014 (ProtonMail was developed in 2014) and is headquartered in Geneva, Switzerland. The VPN service is operated by the Swiss company Proton VPN AG, which is beneficiary of Proton Technologies AG and the Foundation Genevoise poir l’Innovation Technologies or FONGIT. The VPN service is legally separated from Proton Technologies due to the security reasons. ProtonVPN currently has almost 500 servers in 37 countries.[2]

Secure core servers are located in hardened datacenters in Switzerland, Iceland, and Sweden, protected by strong privacy laws, and operated on our own dedicated networks.

The review and Test results of ProtonVPN

We tested the ProtonVPN for about a week. The service is compatible with Windows PCs, Macs, and Android devices. For Linux devices users are able to connect to its servers using third-party OpenVPN software. ProtonVPN is now available on iOS (native app). ProtonVPN allows users to set up Windows, Android, iOS, and BlackBerry devices using IKEv2/IPsec instead of OpenVPN protocol. Users are able to sign in anonymously as no personal identifying data is required to create a ProtonVPN account. However, it does require an email address, which can also be anonymous if the ProtonMail email account is used. It took us about five minutes to install and run ProtonVPN Free on our Windows 10 PC. 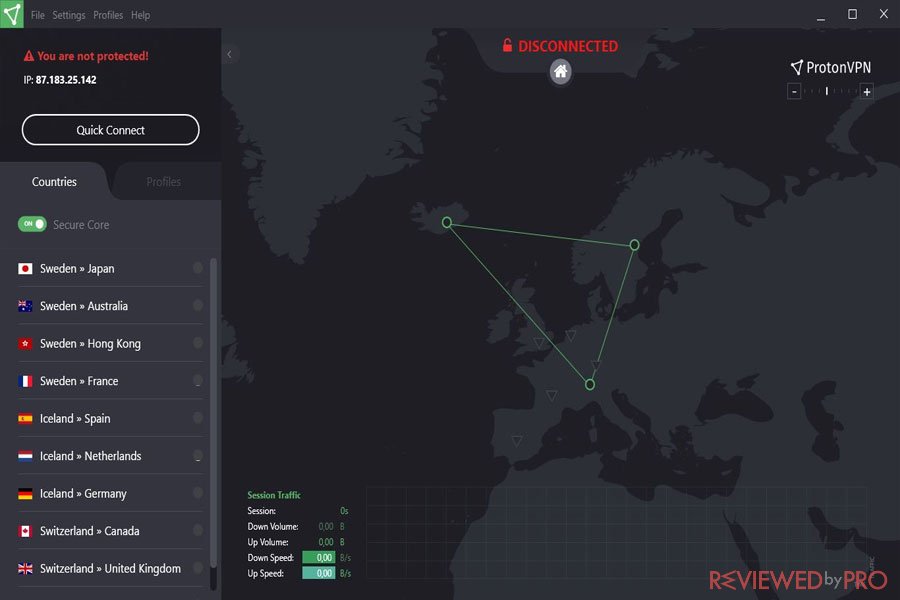 ProtonVPN follows the freemium model and provides users with a free version of the service. In addition, it also offers three versions of paid subscriptions including the Basic plan, Plus plan and the Visionary plan. The Basic version starts at $4 per month or $48 yearly. It offers access in all countries, covers 2 devices and offers P2P support. The Plus plan starts at $8 per month or $96 per year, and the Visionary plan costs $24 per month or $288 per year and includes ProtonMail Visionary. ProtonVPN also offers a 30-day money-back guarantee if users are not satisfied with the service. The free version offers client software for Windows, Mac, and Android devices. Linux and iOS users can connect via the third-party software. The free version also provides users with an unlimited amount of data but users can only connect to ProtonVON servers in Japan, the Netherlands, and the USA.

Many privacy features ensure your security in a different ways

ProtonVPN offers users many additional features in comparison to other ordinary VPN services. For instance, ProtonVPN adds Security Core which provides the unique ability to defend against network-based attacks.

Secure Core protects your connection by routing your traffic through multiple servers before leaving our network. 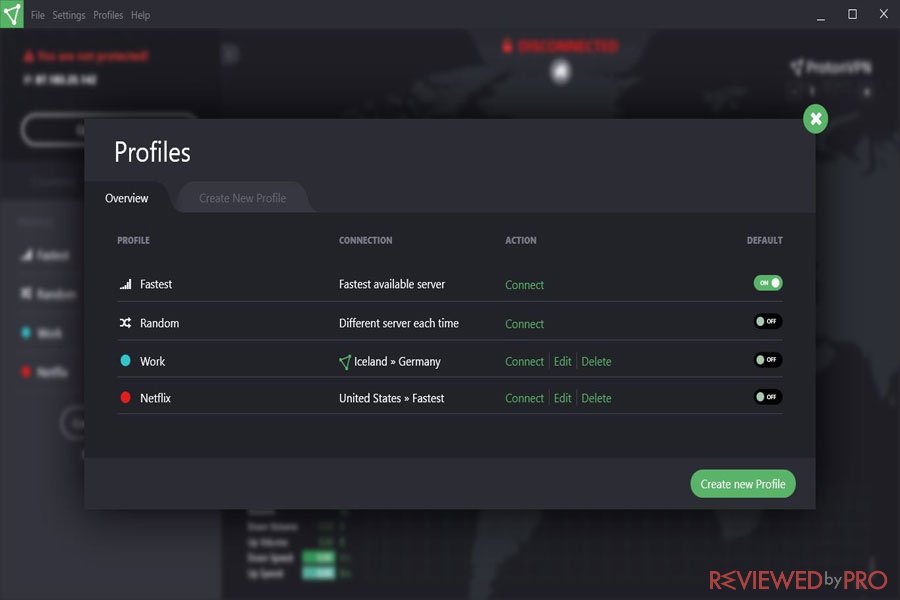 ProtonVPN uses AES-256 to encrypt users’ traffic, 2048-bit RSA to do a key exchange and HMAC with SHA256 for message authentication. These tools are one of the strongest in the market and provide advanced encryption. In addition, the VPN also uses encryption cipher suites that only include Perfect Forward Secrecy which ensures that the encrypted traffic cannot be captured and decrypted. As it was mentioned before, ProtonVPN also applies strong protocols and is Swiss-based which means that the VPN service benefits from strong legal protection, which remains outside the US and EU jurisdictions. The VPN claims that it does not log user data, and mentions that according to the Swiss law ProtonVPN is not obligated to save any user connection logs or can be forced to perform targeted logging. All in one, the VPN service applies strong encryption and protection tools that provide high-level class protections.

ProtonVPN claims that it uses only high-speed servers that have at minimum 1 Gbps bandwidth and many of the servers utilize 10 bps connections. However, these only include paid versions. When it comes to the free version, the service provides relatively slower speeds. For example, it took about nine seconds to connect to the free ProtonsVPN’s US-based servers. Other results were also worse than the paid VPN service, but average for a free one. The data transfer rate was about 50 Mbps which is about 80% slower than the baseline. The upload speeds were average – 37% slower than the baseline. However, the network latency was only 100 milliseconds, which is very slow. We also played music and video files on our test Android phone and did not notice any interruptions or slowdowns.

Customer support is at a high level and ensures fast technical issues removal.

ProtonVPN provides users with a very informative support page. It includes FAQs section with General Information, Download and Setup, Account, Troubleshooting, and Access Content options. Users also are able to contact ProtonVPN support team by filling out the support form or send them an email. 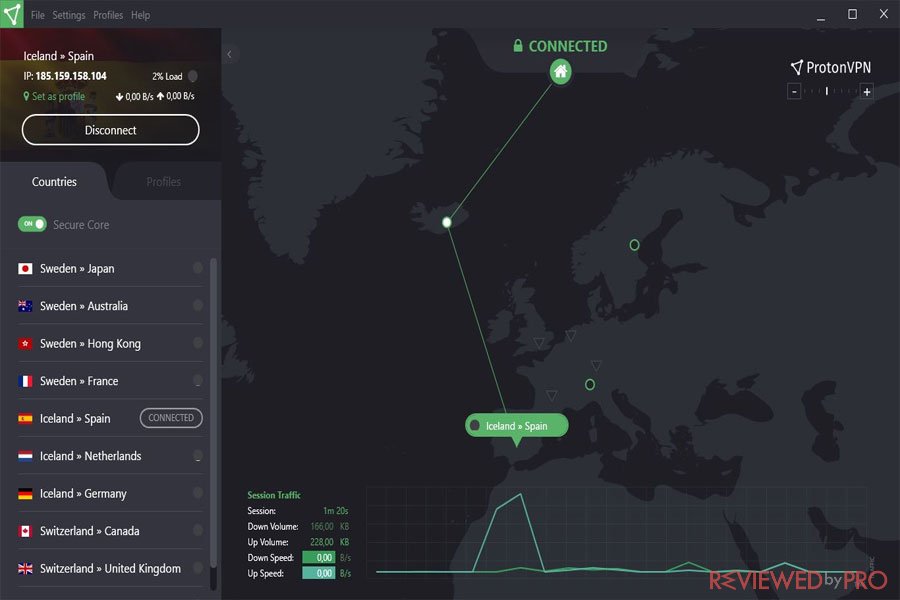 ProtonVPN has a dark interface which is also simple and easy to manage. All the applications, including a mobile version and desktop version, have an intuitive interface. Users can enable the VON service within a single click or tap, choose the location or find other necessary features easily. Custom connection profiles are also available.

The final verdict ProtonVPN provides users with advanced protections, Swiss-based servers, and a decent set of security and privacy features. It also includes free unlimited data, however, the free version’s performance rates are lower than the average.