Various cyber threats such as trojans, adware, ransomware, spyware, PUPs and other malware attack millions of Internet users every day. Even though some of them may seem harmless, others can cause a lot of damage to your device or/and sensitive and personal information. Remember, it is always better to prevent attacks rather than try and fix the consequences. That’s where you have to make a seemingly difficult choice – which security tool should you use?

Researchers at Reviewed by Pro constantly test and review Security solutions, so users can choose the right application that fits their needs.

If you are trying to choose between two reputable security providers Kaspersky and Panda, you are on the right page!

If you do not have to read the entire article, check out this table. Our researchers tested the antivirus packages by five different categories including offerings, antivirus protection, feature set, system-performance impact, scanning performance, and user interface. This table reveals which provider wins in each category.

Kaspersky is developed by a Russian multinational cybersecurity company, Kaspersky Lab. The company was established in 1997 and since then provides award-winning security products for both, individual users and businesses.[1]

Kaspersky works with premier software and hardware to deliver its customers the best security solutions across all the major operating systems, including Kaspersky Anti-Virus for Windows, Kaspersky Internet Security for Android, Kaspersky Internet Security for Mac, and iOS devices, password management, endpoint security, and other cybersecurity products and services for customers and businesses (Kaspersky Small Office Security).

Panda Security is a Spanish-based software company that specializes in security software for consumers and businesses. Panda Security focuses in antivirus, firewall, spam, and spyware detection, as well as advanced cyber security services with technology that prevents cybercrime. The company was established in 1990.[2]

Panda Dome is a once-complex suit of next-gen antivirus applications that are compatible across all of your devices, including Panda Dome for Windows, Panda Dome for Mac, Panda Antivirus for Android and iOS devices.

When it comes to Windows users, Kaspersky offers users four different packages that can cover up to 5 devices:

Kaspersky also provides a free 30-day trial version, to try one of the Kaspersky products.[3] 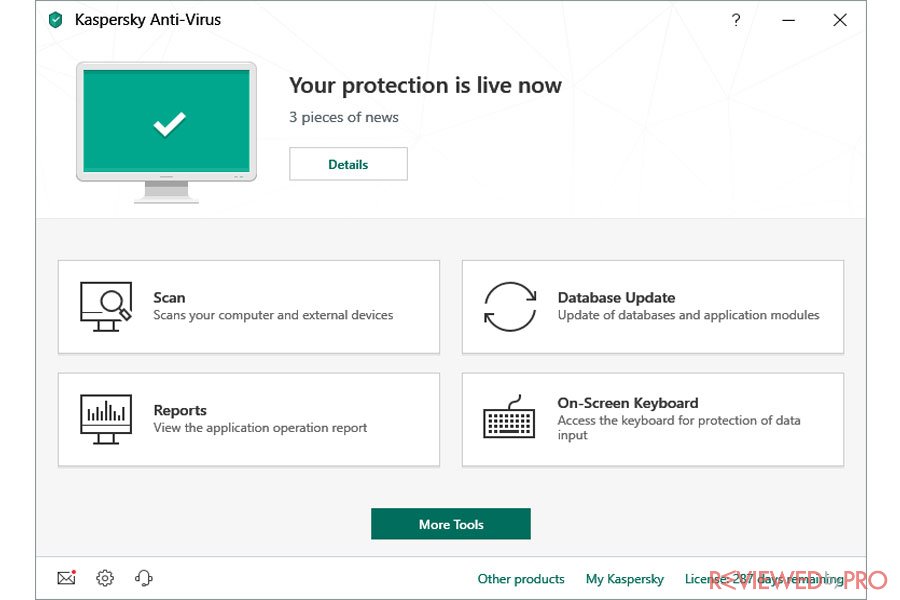 Panda Dome offers users with a free version of the application and has four paid versions, including the following:

Discounts and offers are often available. Our readers actually get 25% discount. So make sure to check our offer!

Panda also offers users a 30-day money-back guarantee, so you will be able to test the application and see whether you like it or not.[4] 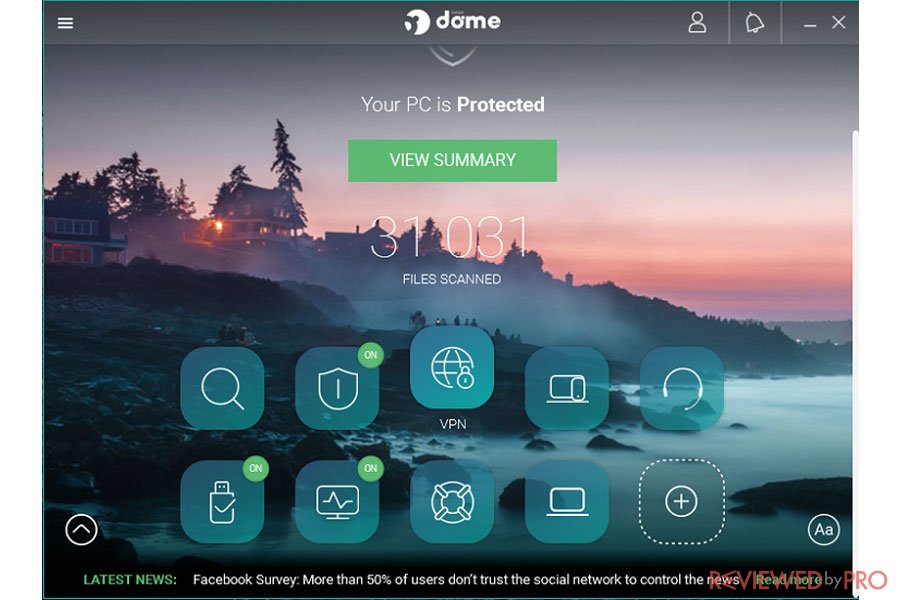 All in one, as you can see, Panda offers more features, such as VPN service.

All suspicious items are sent to cloud-based servers for further investigation.

Kaspersky has detected all the threats we have installed in our test PC running Windows 10, while Panda missed some malicious samples.

The independent AV-TEST[5] testing lab tested Kaspersky in its the most recent tests. Kaspersky demonstrated one of the best malware detection rates and detected 100% of both, zero-day malware attacks, including web and email threats and 100% of widespread and prevalent malware.

Panda’s results can seem a bit inconsistent. It did not participate in the most recent tests conducted by the independent German-based AV-TEST. However, according to the previous tests, the results varied between 99% to 100%.

According to our test results, Kaspersky Anti-Virus can slow down your system by a maximum of 10 percent, which is a perfect score.

In addition, AT-TEST also rated Kaspersky 6.0 out of 6.0, as it delivered better results than the industry average.

The first scan took about 30 minutes, the subsequent scans were finished in less than ten minutes, which is pretty fast. In addition, it quick scan only took about 2 minutes to complete. During the full scan, the OpenOffice tool finished about 30% slower than the baseline, which is in the middle. 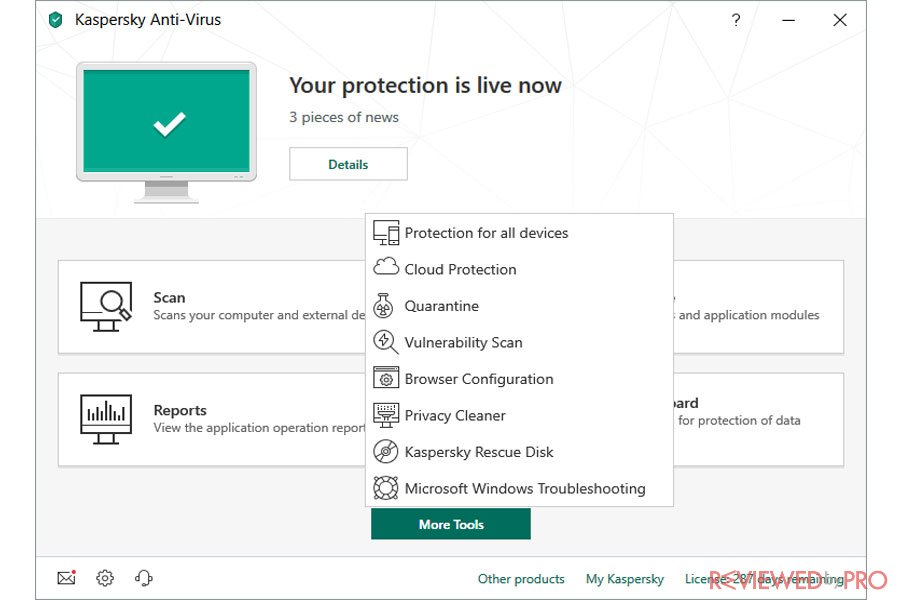 Panda was tested by AV-TEST that rated the antivirus only 3.5 it of 6 when it came to its performance rates.

Panda also offers various types of scans including Full, Critical and Custom. If you prefer, you can scan any file or folder using right-click and select to scan it. In addition, scans can also be scheduled.

When it comes to performance results, Panda has never been a winner. It has a notable impact on a system and tends to slow down system’s performances. 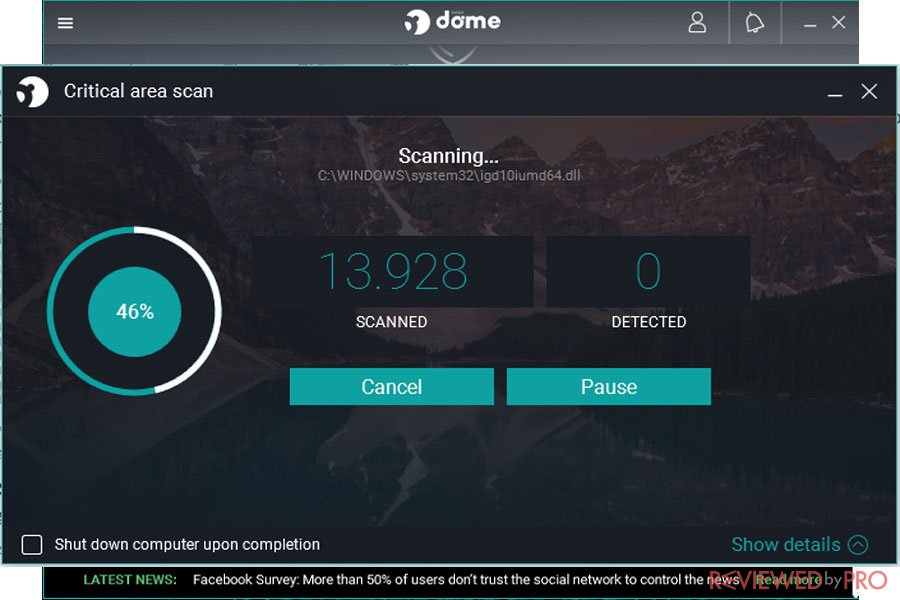 To sum up, Kaspersky demonstrates better performance rates and lower impact on a system

Kaspersky has a modern design and the user interface is easy to use. However, despite this, there is an issue with the navigation. If you move away from the Home screen, you will not have many choices – to use another feature, you will have to press ‘Return’ and only then you can choose another option.

The Panda’s user interface is quite good-looking and convenient. After rebranding from Panda Security to Panda Dome, the interface changed but it is still very well-designed and pleasant to use. The main window provides with all the main features and options. It also has the left-side menu bar that mirrors the icons and ads powerful categories, such as Settings.

Kaspersky provides users with a very informative support webpage that includes Knowledge Base, How-to videos, forums, and FAQs. The support can be reached via My Kaspersky, email or phone.

Panda, however, does not offer free support but also has a very convenient support page that includes a huge knowledge base, including FAQs, manuals, tips and other important product-related information categorized according to the product and operating system.

Kaspersky is also one of the best choices in the market. However, its interface could seem a bit confusing and it does not offer a VPN service or flexible plans.

Panda is a relatively decent choice. It an attractive user interface and some unusual features like the vaccination tool or the rescue kit or a VPN service. However according to test results, Panda has a notable impact on a system, and its malware detection rates are just mediocre.

As you can see, according to the test results, Kaspersky is a better choice for those who look for superior malware detection without any interruptions or performance issues.

The table below summarizes our test results.

If you are trying to choose a right antivirus, make sure to check out Reviewed by Pro! Our researchers constantly test and review Security, Privacy, Recovery solutions, and other utilities.

Your opinion regarding Kaspersky VS Panda Cancel reply