This article will provide the comparison of Internet security packages G Data Antivirus and ESET NOD32 Antivirus. Both of the software packages are praised by consumers and experts. G DATA is known for creating one the very first antivirus software programs in 1985 and being one of the first companies to enter the market, while ESET offers one of the best-rated and powerful anti-virus and firewall products.

G DATA Antivirus was developed by a German-based software company G DATA Software AG.[1] The company is one of the eldest in security software industry. G DATA developed its first Antivirus Solution in 1985.

G DATA is one of the leaders in the market and provides quality security technologies and antivirus products to customers in over 90 countries across the globe. G DATA Offers security for Windows, macOS and Android devices, and also businesses and large enterprises. 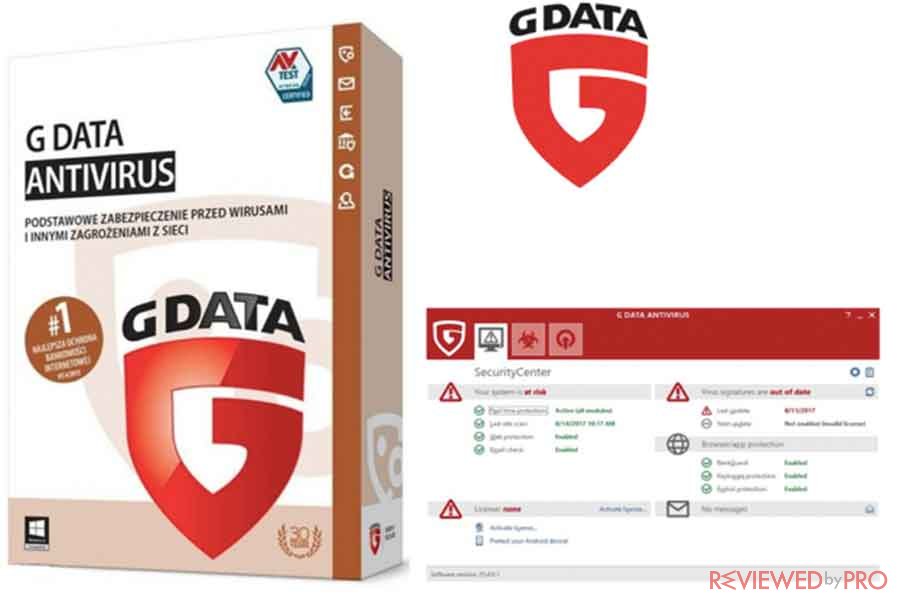 G DATA Antivirus not only detects threats on your computer but also protects your computer from getting them in the first place. Researchers at Reviewed by Pro[2] tested the software for about 30 days in a row, in order to reveal its main pros and cons. 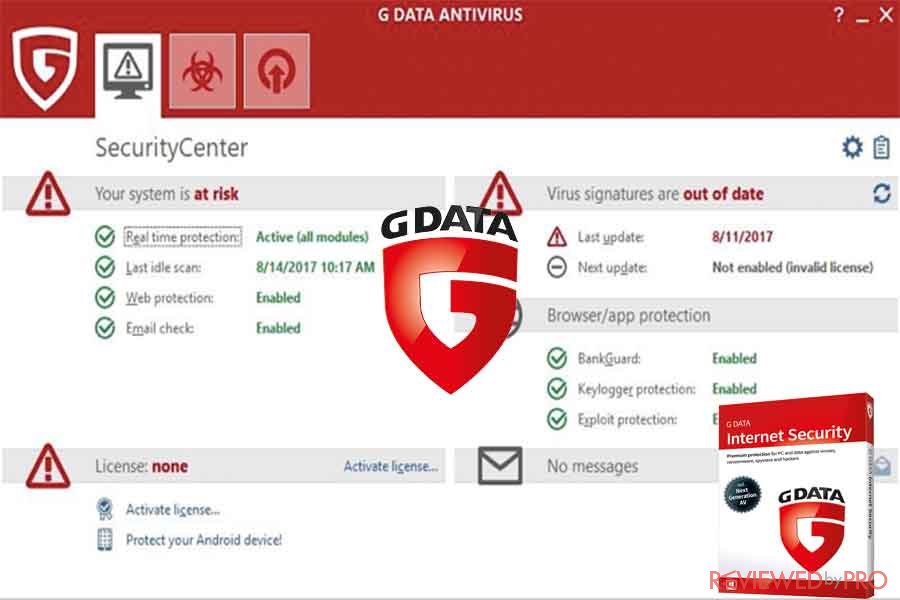 G DATA receives many reviews about their products. Many users indicate that the negative side of the software is lack of a quick scan and a protection against ransomware. Although, the majority of users are happy with G DATA Antivirus.

After a 30-day test of the software, researchers came up with the final verdict.

G DATA Antivirus is a great piece of software after all. Although it has some issues, like the PC performance drops, long scans and the lack of some basic features – it is still a good choice for an everyday user. This software will protect your computer from downloading infected files and will surely find them if there are any on your computer already.

ESET NOD32 Antivirus is created by ESET,[3] IT security company based in Slovakia. The company provides high-quality Internet security and antivirus software since 1992. Today ESET security solutions are available for individuals and businesses in over 200 countries and territories. In addition, NOD32 is one of the most recognized security software praised by anti-malware critics. 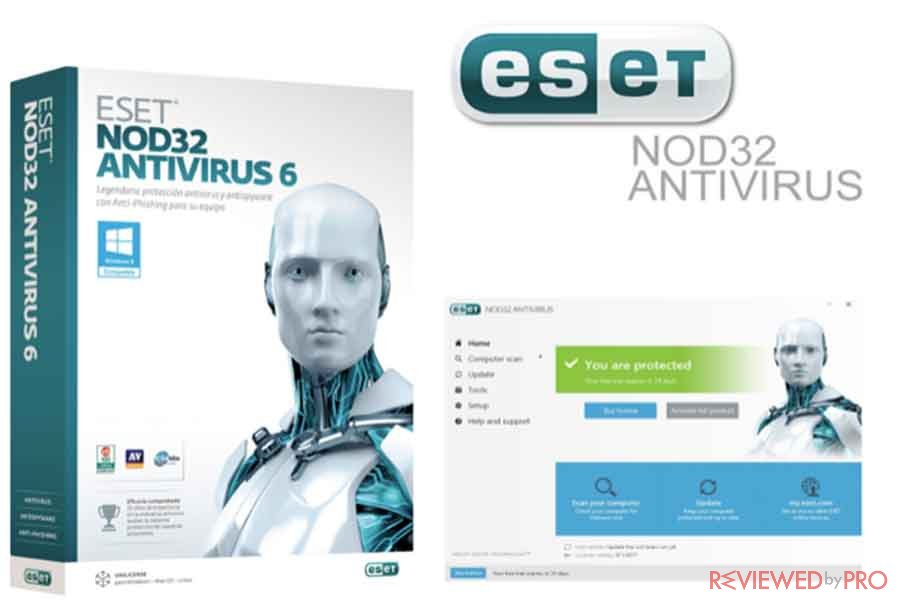 Researchers team at Reviewed by Pro[4] used the antivirus for approximately 30 days. After the test, researchers team disclosed its’ main pros and cons. 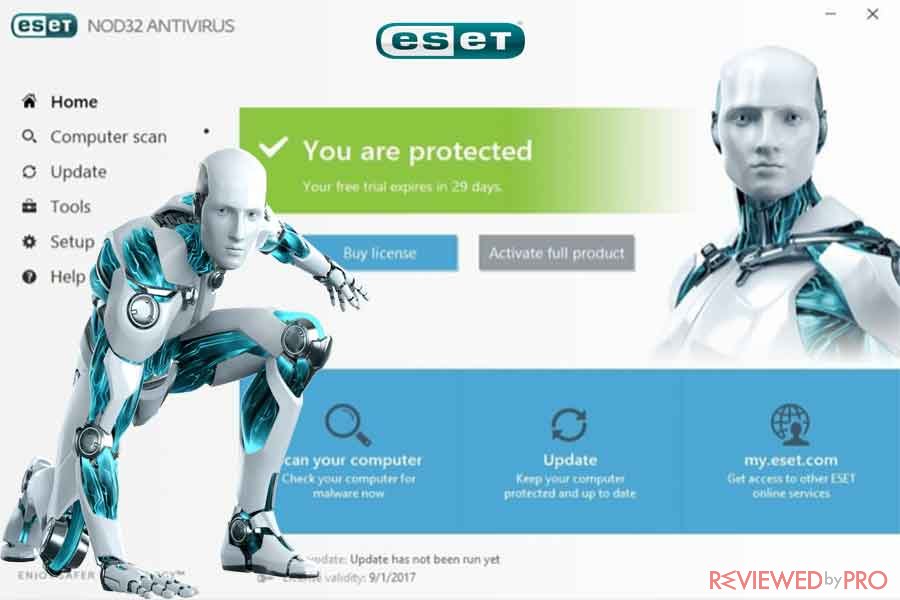 The software download is quick and easy due to a small size of the program. Systems that are compatible with the ESET NOD32 application include Microsoft Windows 10, 8.1, 8, 7, Vista, and Microsoft Windows Home Server 2011.

After using the software for about a month, researchers came up with the final verdict.

“It really has everything that an average user would need from an anti-malware program. Also, it is likely to be a good choice for the advanced user.” Researchers continued,

“ESET NOD32 managed to make a user interface that is good enough for both types of users. Despite this fact, probably the number one thing a person is looking for when choosing an anti-virus program is perfect virus detection and removal rates along with an advanced anti-phishing system. Be assured that ESET NOD32 has all of it. The developers at ESET proved once again that they aren't among the leaders in the competition for nothing.”

Simple but quality G DATA Antivirus software would be a great every-day choice for the average user. It detects even he smallest pieced of malware and provides useful unique features. However, it has no ransomware protection, so you won’t be secured 100% unless you have another Internet security application working together with G DATA Antivirus.

If you are looking for the highest-quality software that provides perfect rates at malware detection and removal, one of the best anti-phishing and real-time protection systems we definitely would recommend you ESET NOD32. The software is also easy to use and offers helpful customer support.

Lucia Danes is a news editor at Reviewedbypro.com. She is extremely passionate when it comes to helping people deal with various online threats, so she wants her articles to be understood even by those with no IT background.