Every day new malware samples and various types of viruses are developed in order to infect users’ devices. If you browse the Internet, no matter what device you are using, a Windows PC, Mac, Android or even iOS device, you can get infected.

In addition, if have already noticed your device acting weird, causing slowdowns or interruptions, there is a high chance that you might be dealing with malware already.

This is why you need a reliable and trustworthy antivirus. To make it easier to choose, Reviewed by Pro constantly tests new products in order to provide you with up-to-date information and reviews of the latest Internet security and antivirus applications, privacy solutions, recovery tools, and other utilities.

This article will help you choose between security software industry giants Norton and McAfee.

Which is better Norton or McAfee?

Norton[1] and McAfee[2] are ones of the most popular and widely-used antivirus and internet security solutions in the market. Both companies have long experience in the industry and offer a range of digital security products and services.

If you do not have to read the entire article, check out the table below. It reveals the winner according to different tested categories, such as offerings, antivirus protection, additional features, performance, interface design, and popularity.

Norton[1] software is developed by an American-based security giant Symantec[2].

The company is headquartered in Mountain View, California, United States, and has centers in Pune, Chennai, and Bengaluru. Symantec focuses on digital security services since 1982 and owns names such as SurfEasy VPN, Norton, and other famous brands.

McAfee is developed by one of the well known American-based cybersecurity giant McAfee, Inc.[2] The company is headquartered in Santa Clara, California. McAfee is one of the most experienced players in the market and was founded in 1987 by John McAfee. In 2011, McAfee was purchased by Intel Corporation.[3]

Norton also offers a variety of packages to suit every customer needs. Norton has a range for home and business users across all the major operating systems. For home users, Norton offers the following: 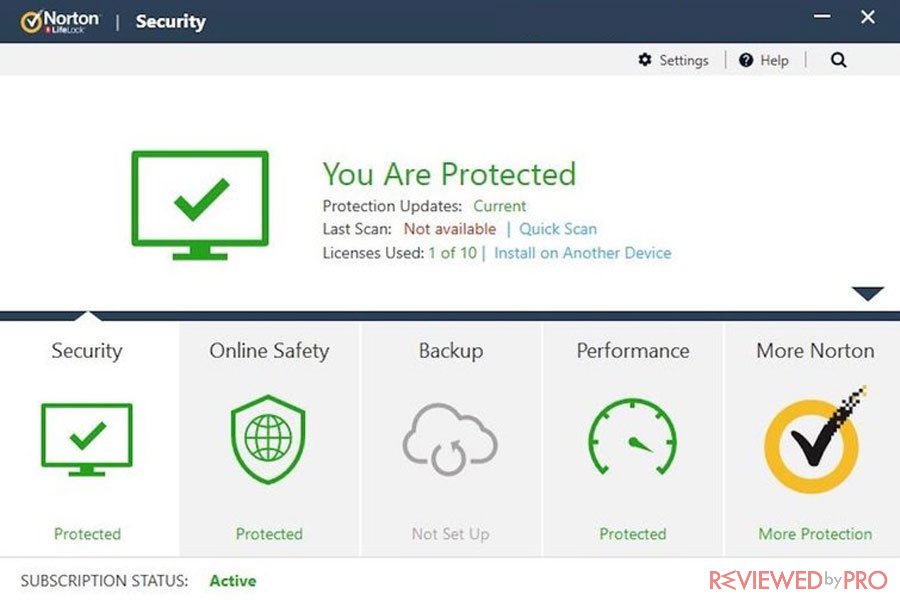 Meanwhile, McAfee lets users choose from various tools and flexible packages. The main antivirus and security packages include the following:

These both packages cover Windows, macOS, Android, and iOS devices.

McAfee also offers a 30-day free trial, so users can try the software before purchasing it. 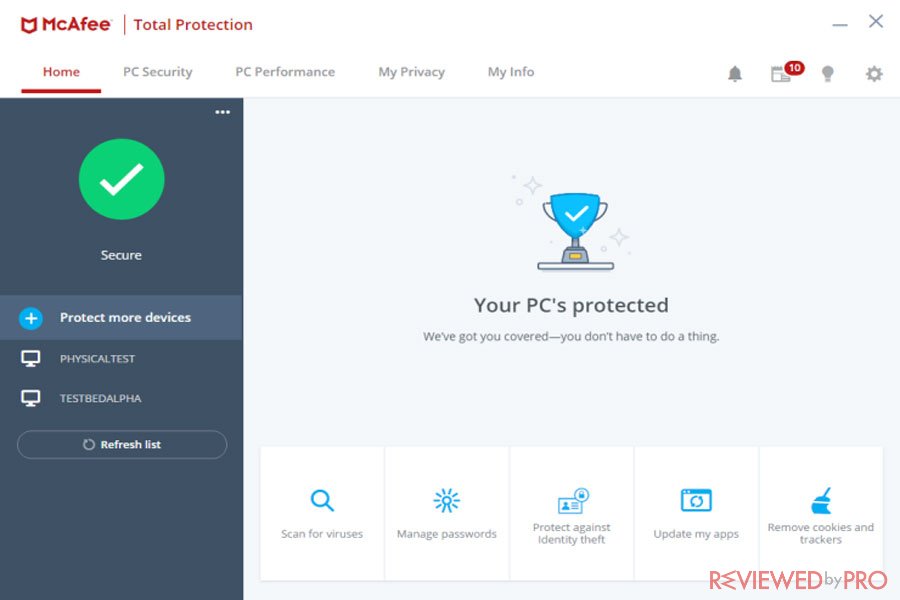 What you are getting: Additional Features

LifeLock Standard and Norton Secure VPN. These tools can be added together with security software or purchased as standalone applications.

When it comes to McAfee, it also develops various tools for consumers, including Identity Theft Protection, TechCheck, Tune-Up, Virus Removal Service or more.

When it comes to security and antivirus protection, these are the main features:

To sum up features, McAfee offers a more generous selection of features in its paid plans. It also develops a variety of tools that can be added and used together with a single subscription.

In order to protect PCs against malware and viruses, Norton together with Avast uses a traditional signature-based malware detection and heuristic monitoring. In addition, the defenses include intrusion prevention which analyzes network traffic. All of the suspicious files detected are sent to the company’s cloud-based servers for further analysis.

When it comes to malware detection rates, Norton demonstrates flawless results. In the latest AV-TEST[4] testing lab results, Norton detected 100% of both, zero-day malware attacks, including web and e-mail threats and widespread and prevalent malware samples.

McAfee utilizes multi-layered protection, including a traditional malware-signature engine that looks for suspect code against a database of widespread malicious icons and behavioral monitoring and reputation which detects previously unknown malware. All suspicious icons are uploaded to the company’s Threat Center for further investigation. This new technology has replaced the earliest less efficient engine in 2017.

McAfee demonstrates decent antivirus protection rates. It detected all of the malware samples installed on our test computer.

In addition, the company was tested by German-based independent testing lab AV-TEST.[4] According to its latest test conducted in December 2018, McAfee detected 100% of zero-day malware attacks and 100% of widespread and prevalent malware.

As you can see, both of the providers offer superior malware detection rates in the most recent antivirus tests.

Norton provides better performance results than the market average, as it does not slow down the system or cause interruptions or lags.

When we tested the resource usage of Norton, the antivirus demonstrated average results – the boot time was a bit slower in comparison to other products in the competition; however, it didn’t make a big impact. During the full scan, the application slowed down the system by 17%, which is not that much considering the program does a difficult job scanning every corner of the computer.

Norton was also tested by AV-TEST[4]. According to the most recent test results, Norton Security has a minimal system-performance impact.

McAfee has a minimal impact on computers’ performance. We did not notice any interruptions or slowdowns while using the software in the background. In addition, even during scans, the application did not cause any inconvenience. According to AV-TEST[4] latest tests, the McAfee demonstrated better performance rates than the industry average.

McAfee Total Protection took a relatively small toll on performance during a full active scan. The performance declined only by 14%. However, the first full scan tool for more than an hour, and the second just more than 45 minutes.

Even though the user interface is very informative and provides users with many options and data, some users can find it a bit complex and difficult to use. Most of the features can be found on the main screen which includes tabs for Security, Scans, LiveUpdate, Advanced and Add Devices. 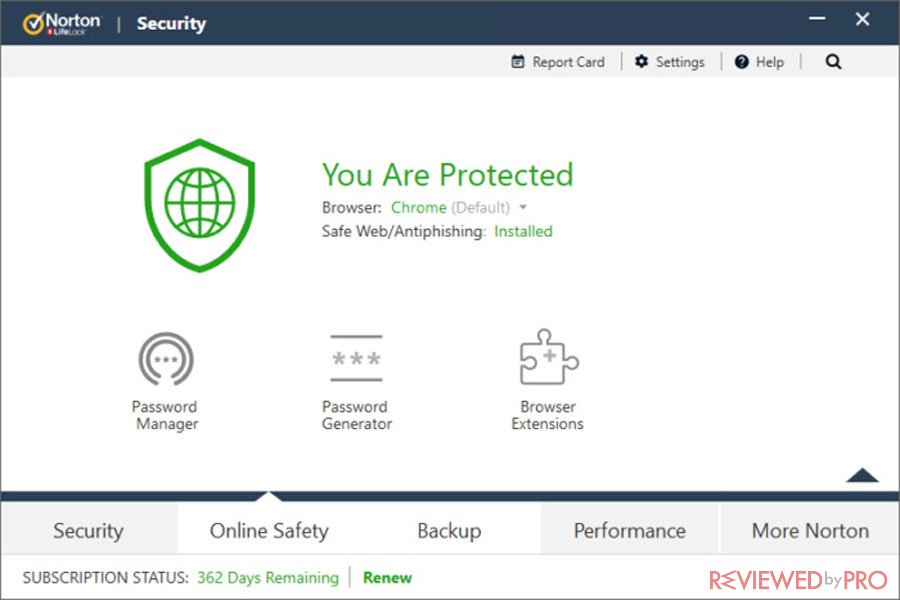 In its very first versions, McAfee used to have a pretty dark user interface. However, over some time the interface was updated and now looks bright and light. When it comes to options, all the main features appear in the main window, so it is easy to navigate and understand. 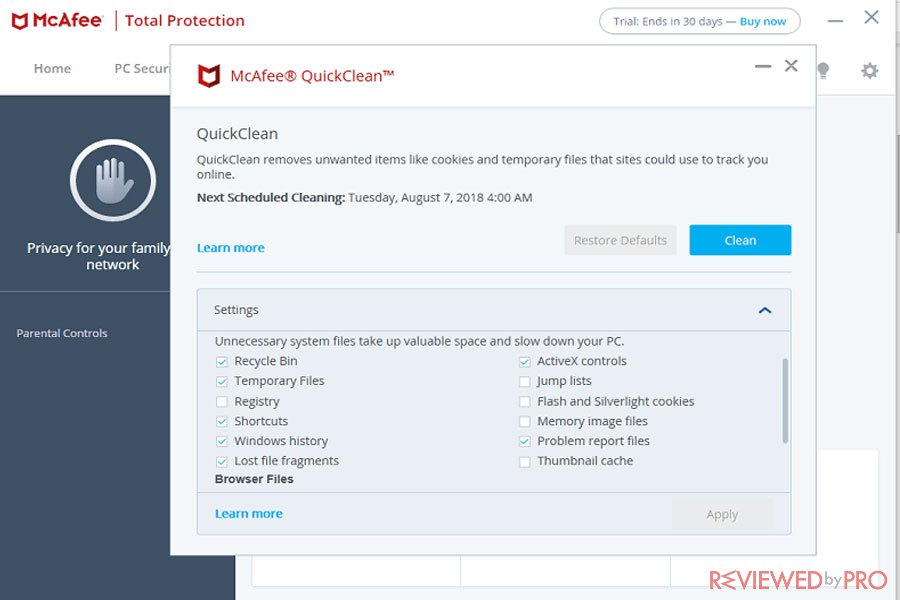 For those, who prefer to look for information themselves, Norton has an informative support page with community forums, FAQs, manuals and other product related information.

McAfee also offers customer support via live chat and phone available 24×7. In addition, McAfee users are available to connect the support on social media, including Twitter, Facebook, and Youtube.

The official support site is very informative and allows looking for information easily. It also offers a virtual assistant for guided solutions, look for information in community forums, knowledge base, FAQs, and other product-related information.

We have also overviewed the brands' popularity according to OPSWAT’s streamlined Windows Anti-malware Market Share Report.[5]

As you can see in the graph above, other popular products include Avast, Malwarebytes, Bitdefender, ESET, Webroot, Kaspersky, Safer Networking Ltd with SpyBot Search & Destroy, Avira.

Norton provides one of the most customizable and flexible security solution available on the market. The application always demonstrates excellent malware detection rates and great performance.

When it comes to McAfee, the application is a better choice for those who look for a full-featured program that can add various tools and programs. McAfee is user-friendly software with a nice interface and many features.

According to the latest test results, both providers offer flawless antivirus protection with only a minimal impact on a system. They are also easy to use.

The table below summarizes our test results. As you can see, Norton and McAfee[6] both offer superior antivirus rates, great performance scores and are well-designed. However, McAfee provides a wider selection of additional features and tools and is more popular among the consumers. In this case, we recommend McAfee.

Your opinion regarding Norton VS McAfee Cancel reply