Zemana Mobile Antivirus[1] was developed by a cybersecurity company called Zemana. The security provides antivirus and anti-malware solutions that protect both home users and businesses.

The company was founded over 11 years ago in 2007 and today successfully operates in the cyber security industry and has offices in Europe and Turkey.[2] 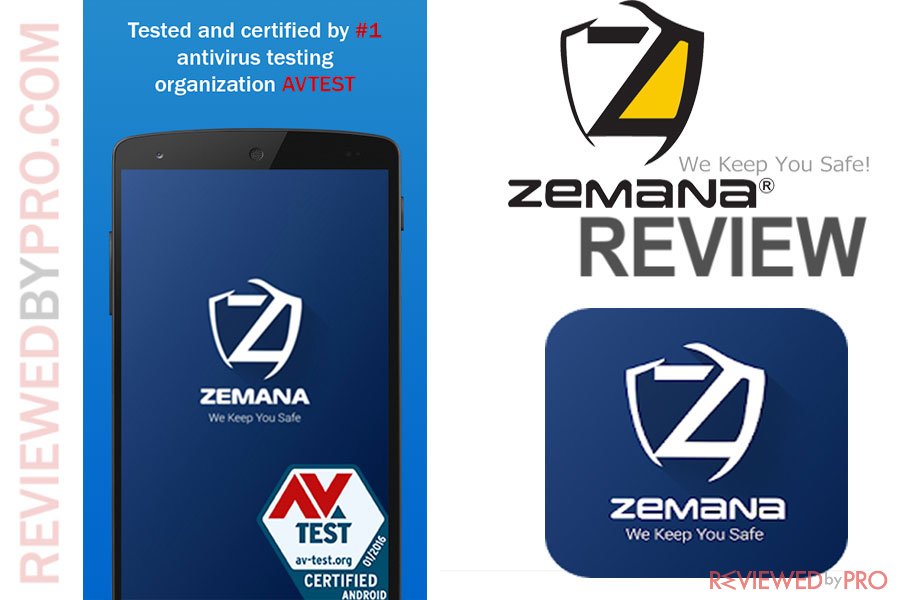 When it comes to home users, Zemana provides them with various security solutions, such as Zemana Anti-Malware, Zemana AntiLogger, and Zemana Mobile Security.

Zemana Antivirus & Security for Android was created to provide security and protection for Android devices, including smartphones and tablets, against any kinds of mobile threats, such as malware, spyware, virus, trojans, and keyloggers. The app also protects users privacy and personal data.

Zemana Mobile Antivirus, just like most of the other Android antivirus programs, provides users with a free limited feature app, and the Premium version which you can try for free for 15 days. 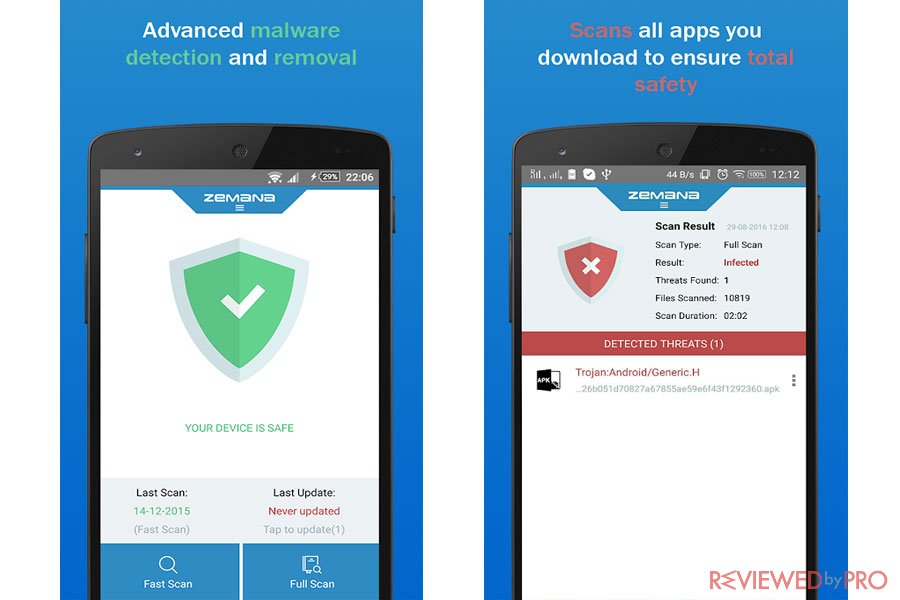 Zemana Mobile Antivirus & Security for Android has over 100,000 installs and requires Android 2.3 version or later. The mobile antivirus app has a rating of 4.2 stars out of 5 at the Google Play app store. The free download comes with 15-day free premium version.

Zemana Mobile Security has been tested by our researchers using a highly infected Samsung Galaxy S8 G950F 64GB. The application download and setup was quick and did not cause any lags or interruptions.

Zemana Mobile Antivirus applies next-gen technologies to protect its customers against various types of the latest mobile threats including virus, malware trojans, spyware, adware, or keyloggers. The automatic database updates keep the device stay in sync with the most recent threat database information.

Zemana Mobile Antivirus & Security for Android detected most of the threats and adware installed on our test device. What we really liked was that it detected and cleaned the device from malicious text messaging applications, that other security apps missed. However, it missed some other malicious apps, which was a bit disappointing.

Zemana Mobile Antivirus & Security has not been tested in the most recent independent testing lab AV-TEST tests. However, it participated in the test couple of years ago. What we like about AV-TEST, it uses multiple testing devices and has thousands of malware samples and malicious applications, so their test is bigger and more accurate. Zemana Mobile Antivirus only demonstrated average antivirus protection, as the app detected only 98% of the latest Android malware in real time (industry average at the time was 98.9%) and 99.5% of widespread Android malware (industry average at the time was 98.8%).[4]

As you can see, even though the security application has a unique security feature that detects keyloggers, the traditional antivirus protection is only average. 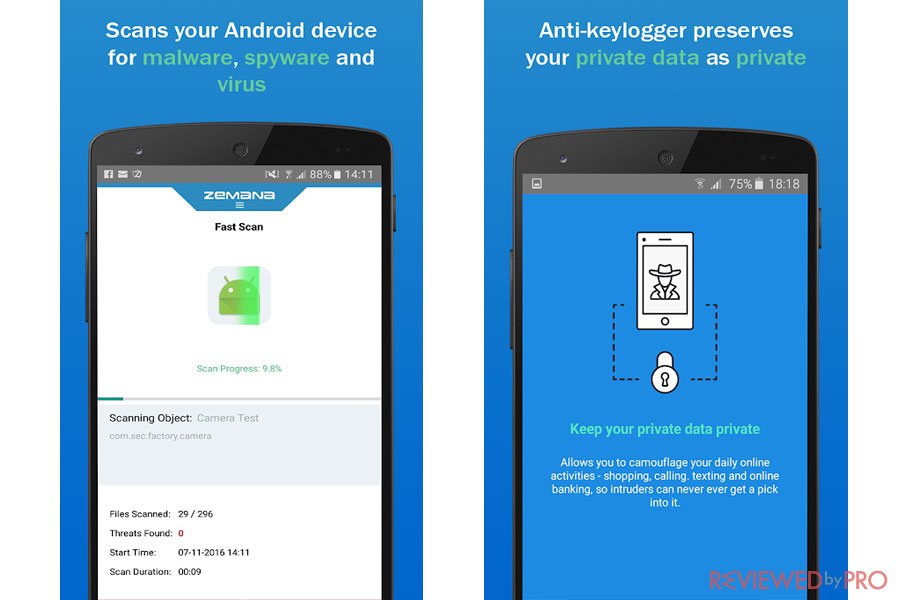 Zemana Mobile Antivirus for Android has a very limited feature set even in its paid version. It could be as an advantage if you do not require advanced premium features, such as Backup or Parental Control, however, it does not include even Anti-Theft features, Encryption or Web Protections. The mobile security app includes Real-Time Protection that automatically scans all newly installed and updated apps, so users do not have to initiate a manual scan. Automatic Database updates keep the device in sync with the most recent threat database. The Anti-Keylogger protection identifies and stops malicious keyboard applications that can track what you type.

In addition, Zemana offers users Free 24/7 customer support. If any you deal with any emerging threat, Zemana technicians will connect to the device and remove the threat manually.

To sum up, this security application will fit those who do not need many additional features and only look for security and anti-logger features.

Zemana Mobile Antivirus is a very lightweight software that does not impact the device’s performance. It did not generate too much traffic or cause any lags. The app is quick to download and easy to set up. What we really liked that it does not impact the battery life and did not slow down the device during both, normal usage or scans. The app’s performance was also tested in the AV-TEST in 2016. The test results indicated that the application has good performance rates and do not have a negative impact on the system.

When it comes to scanning performance, the full system scan was quick and took about 20 seconds. Users do not actually need to initiate scans manually, as all of the newly installed and updated apps are scanned automatically. The scans are accurate and informative.

Zemana Mobile Antivirus has a very simple user interface. It is very easy to navigate and use. The main colors of the interface are blue and white. It also uses red and green to indicate about the device’s health, as green means that the device is safe and protected, and the red one that threat was detected. 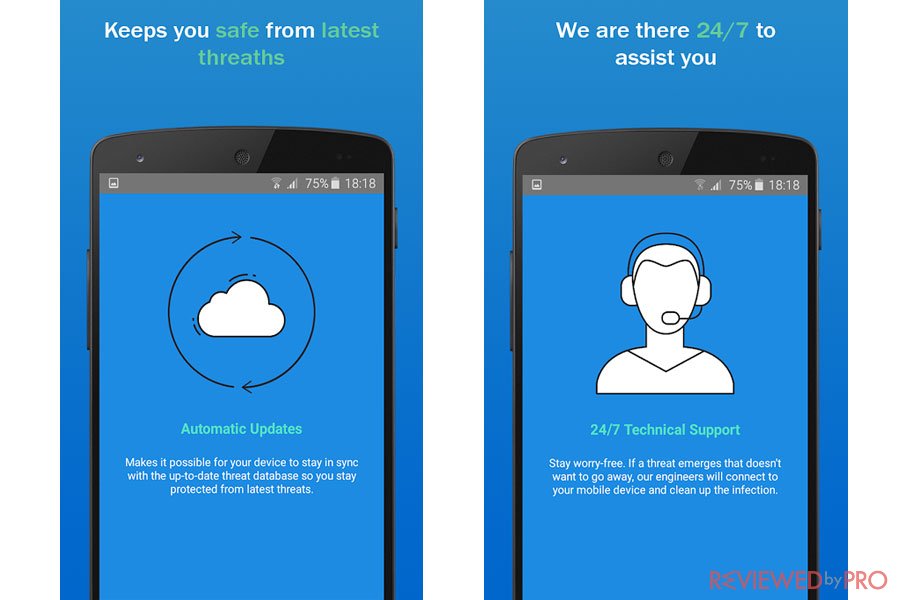 Zemana Mobile Antivirus & Security for Android is a very simple application, which provides main security features and aims to protect users against various types of threats, such as malware, virus, trojans, adware and more. It also includes a unique Anti-Keylogger feature, which secures the device against malicious keyloggers that try to track what users type. It has great performance rates and simple user interface. However, if you need additional features and better antivirus protection, we recommend you to choose different an antivirus app for your Android.

Your opinion regarding Zemana Mobile Antivirus for Android Cancel reply